She slept beneath a tree
Remembered but by me.
I touched her cradle mute;
She recognized the foot,
Put on her carmine suit, —
And see!

In her letters to a friend, Emily writes, “Did you ever know that a flower, once withered & freshened again, became an immortal flower,–that is, that it rises again? I think resurrections here [in my garden] are sweeter, it may be, than the longer and lasting one – for you expect the one, & only hope for the other.”

We know that Emily loved perennials–especially bulbs–because of this quality. I must admit, I share it with her. I’ve always preferred herbs and other perennials to annuals because it is a joy to see them come year after year after year. They’re hearty–like the tulip I found in the pile of yard waste last Spring. They give you hope in something greater than living and dying.

Maybe we will continue on, just as these bulbs do. 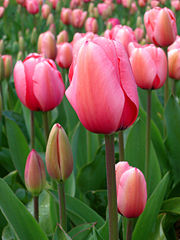 The tulip was brought from Turkey to Europe in the 1600’s and carries some heavy symbolism. Here is a quote from the Teleflora blog site: Please check them out at http://www.teleflora.com/flowerblog/

Although different tulip colors carry distinct meanings – yellow tulips symbolizing cheerful thoughts, white conveying forgiveness and purple representing royalty – a Turkish legend may be responsible for the red tulip’s symbolism. The story goes that a prince named Farhad was love struck by a maiden named Shirin. When Farhad learned that Shirin had been killed, he was so overcome with grief that he killed himself – riding his horse over the edge of a cliff. It’s said that a scarlet tulip sprang up from each droplet of his blood, giving the red tulip the meaning “perfect love.”

The 11th wedding anniversary flower, it’s said that the tulip’s velvety black center represents a lover’s heart, darkened by the heat of passion. With the power to rival roses in their red variety and the sweet charm to express simple joy when yellow, it’s no wonder that in addition to all its other symbolism, in the language of flowers, a tulip bouquet represents elegance and grace.

My search for one of our previous Dickinson flowers–the Snowdrop–brought me to the “Snowflake.” I thought, maybe, the store had misnamed the flower–but it turns out, they are two different flowers altogether. Here is a picture of my Snowflake, 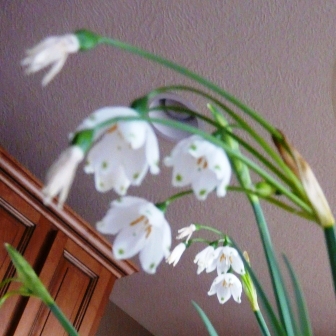 I’ll plant it, and continue to look for the Snowdrops.

I found the Snowflake in an unusual spot. I was taking the grandkids out to buy flowers for their little sister who was in the hospital, and we saw it among the others–the tulips, hydrangeas and lilies. Each child was able to pick out one flower. Two chose the hydrangea–and one the lilies. They can take their little sister home and plant their flowers and watch them come up every year to remind them of the joy they should feel that she is alive.

Bulbs are a miracle, aren’t they?

Do you have a favorite one in your garden?

This entry was posted in Uncategorized and tagged tulip, tulip symbolism, tulips. Bookmark the permalink.