One of the first flowers I photographed this year was the crocus. And low and behold, there was a little friend climbing in and out of it. A sure sign spring had arrived.

Bees are Black, with Gilt Surcingles –
Buccaneers of Buzz.
Ride abroad in ostentation
And subsist on Fuzz. ……

Fuzz ordained – not Fuzz contingent –
Marrows of the Hill.
Jugs – a Universe’s fracture
Could not jar or spill.

And on a recent trip out of town to Gig Harbor, I caught this little one gathering pollen. 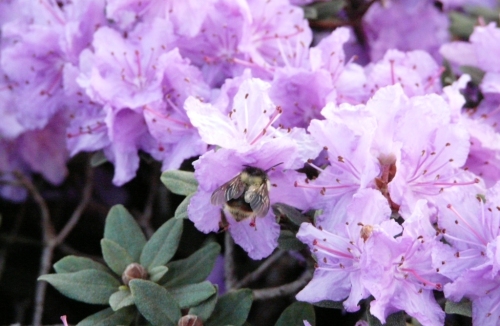 One of my blog visitors, Emily Heath, has a fabulous blog of her own devoted to bees, “My beekeeping bumbles”, as the title says, it’s Adventures in Bee Land. She has captured some amazing pictures of bees doing their work and returning to their hives. It’s a treasure trove of information as she undertakes the journey of a beekeeper in Ealing, West London.

In an April 5, 2012 article in my small local paper–The Cheney Free Press, a beekeeping family was highlighted. I hope to go out and get some of their honey today and to attend some of their public education field trips. Here are a few excerpts from the article and you can follow the link above to read the whole thing.

Martin and Marcia Davis left California several years ago and landed in the Cheney area looking for a new adventure. They had bees and chickens in mind.

Martin is working on an entomology degree. He said, “All honey bees come from Europe in a box.” The queen bee has her very own boudoir, a three room apartment (think child’s little pinky) with a cork stuffed with marshmallow on each end. The worker bees gradually chew through the passageway as the queen bee gets used to them and they to her. Now accustomed to the hive the queen then makes her own place for the cone she lays her eggs in.

Martin Davis said, “A bee has a double stomach. One part is for feeding himself and the other part is the honey stomach.” We all know the expression ‘busy as a bee’. Davis said, “A bee makes a million trips to make a pint of honey.” I’d say we ought to appreciate that hard-working little fellow with a gold medal of some sort.
Honey isn’t the only thing a bee provides. He specializes in diversity. Bee venom from the stinger is used by pharmacies. Bee wax can be used for its antibacterial, antiseptic or anti fungal properties. In earlier years bee wax was applied to a bandage before antibiotics became available. You will find bee wax in cosmetics and furniture polish.

When you encounter a honey bee treat him gently and send him on his way. Your reward will be extra sweet.

Emily had a few things to say about bees in her poetry, too.

Like Trains of Cars on Tracks of Plush
I hear the level Bee-
A Jar across the Flowers goes,
Their Velvet Masonry

Withstands until the sweet Assault
Their Chivalry consumes,
While He, victorious, tilts away
To vanquish other Blooms.

His Feet are shod with Gauze,
His Helmet is of Gold;
His Breast, a Single Onyx
With Chrysophrase, inlaid.

His Labor is a Chant,
His Idleness-a Tune-
Oh, for a Bee’s experience
Of Clovers, and of Noon!

When Mabel Loomis Todd and TW Higginson published Emily’s poetry after her death, they edited many of her poems. These two poems were placed together as one and titled, The Bee. Here it is, as edited.

Like trains of cars on tracks of plush
I hear the level bee:
A jar across the flowers goes,
Their velvet masonry
Withstands until the sweet assault
Their chivalry consumes,
While he, victorious, tilts away
To vanquish other blooms.
His feet are shod with gauze,
His helmet is of gold;
His breast, a single onyx
With chrysoprase, inlaid.
His labor is a chant,
His idleness a tune;
Oh, for a bee’s experience
Of clovers and of noon!

A few less capital letters, I’d say, and a mysterious absence of dashes.

Here are some more from Johnson’s collection:

Bee! I’m expecting you!
Was saying Yesterday
To Somebody you know
That you were due-

The Frogs got Home last Week –
Are settled, and at work –
Birds, mostly back –
The Clover warm and thick –

You’ll get my Letter by
The seventeeth; Reply
Or better, be with me –
Yours, Fly.

Of Nature I shall have enough
When I have entered these
Entitled to a Bumble bee’s
Familiarities.

His oriental heresies
Exhilarate the Bee,
And filling all the Earth and Air
With gay apostasy

Fatigued at last, a Clover plain
Allures his jaded eye
That lowly Breast where Butterflies
Have felt it meet to die –

The pedigree of Honey
Does not concern the Bee,
Nor lineage of Ecstasy
Delay the Butterfly
On spangled journeys to the peak
Of some perceiveless thing –
The right of way to Tripoli
A more essential thing.

The Pedigree of Honey
Does not concern the Bee-
A Clover, any time, to him,
Is Aristocracy –

#1755–I find it interesting that one of her last poems (they end in Johnson’s collection at 1775 poems) is about bees and clover.

To make a prairie it takes a clover and one bee,
One clover, and a bee,
And revery.
The revery alone will do,
If bees are few.

Now, let’s all go out and find and celebrate the bees!

This entry was posted in Uncategorized and tagged Bees, Honey Bees. Bookmark the permalink.